Real World: Surviving a Deserted Island Paradise in the Philippines! 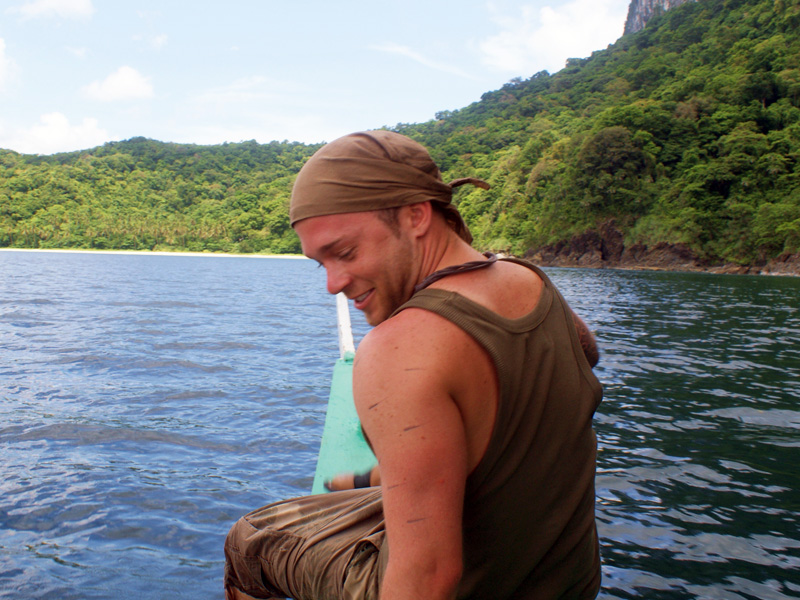 Could you survive on a deserted paradise island? Make your own shelter? Find your own fresh water and fish for your own dinner? In today’s society we have become so comfortable that we have forgotten about the basic skills needed to exist in a sustainable way. But what if you could go back to this simple way of life? Would you be happier? Feel more freedom?

I’ve always wanted to escape from the system, society, money and the material world. I’ve always wanted to get back to nature and live off the land. Forget about deadlines, meetings and making money. Life is so simple, why do we make it so complicated? In short, I want to feel free, try to be self sufficient. One day in the office last year, I made the decision to spend my 26 days holiday getting a taste of another existence and to make my biggest dream come true…

I  managed to persuade an equally crazy colleague of mine to head to Asia with me and try to survive on deserted island. With 7,107 islands, (many of them completely uninhabited), we had chosen the Philippines as our destination of choice and flew from London through Hong Kong to Manila.

We stayed in traffic-clogged Manila for just one night, eager to get out into the real nature. We then fly one-hour to Puerto Princesa on the beautiful island of Palawan… before heading north by bus to El Nido… looking for the spot where we had planned to find our special island. Getting closer to paradise.

El Nido itself is very beautiful in terms of nature, landscape, perfect weather and surrounding islands… but there were still too many tourists for us here! We headed to the Tourist Office and discover that we need permission from the local police before sailing out to an island of our choice – a document that will basically say that the local government is not responsible for the safety of these crazy foreigners. It costs around 4000 pesos for the permission and return boat trip to one of the islands.

Most people thought we were crazy when we told them our plans. They told us that there were some freaks who had stayed on the nearby islands, but only for a night or two. No one had ever done the survival test for two weeks! We got chatting to a fisherman called Ruel who told us of a particular island and even better, he told us that he would take us there and back for 2000 pesos. Could we trust him? Would he come back for us in two weeks time? Well, we’ll see…

Stocking up on Supplies

Once we heard that there was no fruit or water on the island, we decided to go shopping for supplies. We bought 15kg of rice and 6 big canisters of water as emergency supplies, around 120 litres – hey we were beginner survivors – we didn’t want to die! We also bought a machete, oh and lots of Tanduay Rum, the local Filipino tipple! We also took with us: a hammocks, tarpaulins, paracord, mosquito repellant, stainless steel pot and pan, snorkel and goggles, swiss army knife (every boy needs one of these!) salt supplement sachets, camera, solar charger, We were prepared! Or so I thought…

Arriving at the Island & Setting up our Camp

We set off with Ruel on his bangka (a local Filipino fishing boat) and it took us around two hours to get to the island.

It is everything I had dreamed of… stunningly beautiful, a long golden sandy beach, fringed with palm trees, high mountains as a backdrop and not a fellow backpacker in sight! There was not one building, not even a bamboo hut on the island… this is what I had been talking about! We unload the boat and say goodbye to Ruel. Hopefully he would come back for us in two weeks, there was no phone coverage on The Island…

Deserted beach on our paradise island

We found a place to hang our hammocks, mosquito nets and tarpaulin and cleared the ground of some bushes and banana trees, getting cut and scratched in the process. We made a fire to cook the rice and got ready to watch the sunset on our first night on the island.

However, our plans of a relaxing evening were thwarted as we are swarmed by a high cloud of mosquitos and sand flies! Perhaps attracted by the fire? Crazy stuff! We hid in our hammocks, got away with just a few bites and went hungry for the night! No way of getting out from under the net! This survivor island would take a little getting used to…

The first night was a bit unnerving, and we hardly slept. The massive jungle behind us was alive with insects, birds, monkeys and the ground was moving with life. We thought that we hears the sound of a large animal under our hammocks – but not sure what it is… imagination ran wild.

So what did we do during our time on the island? Every day we woke up at the crack of dawn. Our days were spent mostly bathing in the sea and attempting to fish with a broken spear-gun that we borrowed from Ruel. The little fish were all near the rocks and I kept getting cut as I attempt to fish. After hours and hours each day, sunburnt and exhausted, I came away with just a few little fish to go with our 15kg of rice!

Other than that – we made fires, cooked the rice, snorkeled, swam, drank some Tanduay, sang, laughed, just felt free and happy… how could you not in a place like this? My job in England seemed a million miles away.

Not a backpacker in sight!

One day we saw some big tracks and discovered that there were seven big monitor lizards living near our camp. We decided one day to try to catch one – not kill – just catch and have a closer look at it – by digging a big hole in the ground and putting a few fish in it and take some photos. We waited and waited and waited… the lizard approached, took one look at the bait and retreated! They are cleverer than we thought! The next morning, we awake to see that the fish are gone… much cleverer than we thought!

Our trap for the monitor lizard!

We were certainly beginners to surviving on our own in paradise, things were difficult at first (the flies, the fishing, the anxiety) and we were hungry a lot of the time! But I certainly felt that sense of freedom that I have never felt anywhere else. Time ceased to exist and we just lived day by day with no commitments other than surviving. So many people in the West have never experience such a basic way of life for even just a day.

When it was time to go back to the civilized world, I felt like one dream had ended and it was time for another one to begin…

What is Sustainable Tourism?